“I always wanted to be part of the family business. Early on, I did help out. But I never thought I’d have such a big role.”

But taking the business forward and honoring the legacy his grandfather created was no easy task.

First, Freddy had to start at the bottom and work his way up.

The origins of Saffron & Rose

Freddy’s late grandfather, Ali Kashani-Rafye, began making traditional Persian ice cream in Tehran over 75 years ago. Then in the 1970s, he brought his family and recipes to the United States and gave southern California its first taste of genuine Persian-style bastani.

That’s when Saffron & Rose was born. But at the time, the Persian community in Los Angeles was still small.

“Where we opened our first location is now known locally as ‘Persian Square,’ but back in the 70s, there were just two Persian businesses in the area.”

Then in 1979, the revolution in Iran changed all that. 40% of the Iranians who emigrated to the US settled in California, specifically Los Angeles.

From then on, the Persian community grew, which was great for business.

Getting to know the growing clientele

Fast forward to 2005, when Freddy started as the Saturday morning delivery driver.

“That was pre-smartphones. I used to get handwritten directions to deliver the orders to restaurants and markets all over Orange County,” he recalls.

Over time, Freddy worked more and more, often spending long weekends at the family business. All the while studying for his business degree at college.

“When I first started, I worked a couple of days a week. Then, when my grandfather passed away, that turned into seven days a week. The more I worked, the more I noticed the change in the people visiting us. We went from strictly Persian customers to a larger variety. People of all ages, races, and backgrounds. That’s when I knew that if we could change our image and present it with a fresh look and feel, we could capture a whole bigger market.”

Developing a plan from scratch

Freddy knew that if Saffron & Rose was to be his life, then he’d have to convince his family to grow the business.

“I really dedicated myself fully, and I came up with a game plan; costs, timelines, rebranding ideas, the lot. And I presented it to my family. After being told ‘no’ about ten times before, I said, ‘Okay, this is what we need to do. This is how much it’s going to cost, and if I don’t have a say in this family business, then I don’t know how much longer I can work here.’”

It was a risky move.

And inspired by his passion and initiative, Freddy’s family decided to give him a chance.

Now, officially a co-owner in the business with his uncle, Freddy put his plan into action.

He knew that if he wanted to put Saffron & Rose on the map, he’d have to rebrand the business.

That started with a full remodel of the shop and hiring a graphic designer to help him update the business identity for the signage and website.

And while it took a bit of convincing, his family saw the positive effects of Freddy’s vision for Saffron & Rose.

“It did surprise my family. I think a little more than they care to admit about the effect a few little changes had on our business. We went from a small mom-and-pop shop to the point where we’re getting recognition in publications like The New York Times and Business Insider. I didn’t think they anticipated all this could come from something like rebranding and a remodel.”

According to Freddy, one of the main factors in their success lies in a commitment to quality.

It looks like that commitment is paying off. With two locations already open, Freddy wants to maintain the momentum.

“Now we’re in a position where we’re thinking about opening up a new shop every year. Hopefully, in the next couple of years, we’ll have a chain, and then it’s on to the next big task.”

With more possibilities on the horizon, Freddy’s keen to get Saffron & Rose products in major national supermarkets and to continue to grow the business through the US.

“My dream is to have this ice cream in every freezer.”

Each Small Business Story is unique...just like you and your business.

Passion. Perseverance. Possibilities. is a new series from Vistaprint following the pursuits of ambitious small business owners. “Being a small […]

Passion. Perseverance. Possibilities. is a series from VistaPrint following the pursuits of ambitious small business owners. In this episode, Evan […] 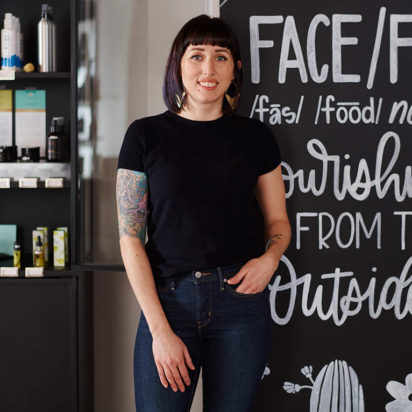 A new year brings new opportunities for everyone...especially small business owners. And Jack Eller, owner and designer of Jack Eller Studio, is ready to take his jewelry brand to the next level.